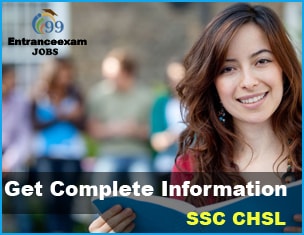 The Staff Selection Commission annually organizes SSC CHSL 2023 exam for the recruitment of candidates to the posts of Lower Divisional Clerk/ Junior Secretariat Assistant, Postal Assistant/ Sorting Assistant and Data Entry Operator in various department of the government. Interested candidates can apply for the same by visiting the official website of the commission. Before applying for the exam, candidates should go through the complete details of the SSC CHSL 2023 Exam. For information such as exam pattern, syllabus, application form, eligibility criteria etc. candidates are recommended to read the article further.

Given below are the official dates for SSC CHSL 2023 exam:

Note: Candidates appearing in class 12thwho will acquire the educational qualification on or before 01.08.2023 can also apply.

Note: Women candidates/SC/ST/PWD/Ex-Servicemen are exempted from paying the application fee.

The SSC CHSL Exam will consist of a computer-based examination (Tier-I), descriptive paper (Tier-II), and typing/skill test (Tier-III). The exam pattern for each is mentioned below–

Tier-II: The exam will be descriptive in nature will carry 100 Marks. Questions on writing essay/letter application will be asked in this paper. Candidates will have the choice to attempt the paper either in Hindi or in English. The duration of the paper would be of one hour.

Tier-III: This will be a typing and skill test. The typing test will be held for the LDC/JSA/Postal assistants and sorting assistant post. The typing speed for the English language should be 35 words per minute whereas for Hindi language it should be 30 words per minute. The duration of the test will be 10 minutes.The skill test will be applicable for the post of Data Entry Operator.Candidates need to maintain data entry speed of 8,000 key depressions per hour on the computer.

The syllabus of SSC CHSL 2023 will cover these sections- General Awareness, English Comprehension, Quantitative Aptitude & General Intelligence & Reasoning. Here are some of its important topics are listed below:

The result for SSC CHSL will be declared tier-wise. Only those candidates can appear for tier-II who have cleared the tier-I level of the exam and so forth. The final result will be published in form of the merit list. The merit list will be prepared according to the marks scored by a candidate at all the levels of the exam. Candidates can also check their score card which will be made available by the authority within 15-20 days of the exam.

For selection into the posts mentioned, a candidate needs to clear all the levels of SSC CHSL 2023 exam i.e. Tier-I, Tier-II and Tier-III (skill test). Based on the scores obtained by the candidates in the exam, a merit list will be published. Candidates selected in the merit list will go through the document verification process and post preference to indicate the post/department they want to be allotted to.

You can apply at the official website of Staff Selection Commission.

Does SSC Chsl held every year?

How many attempts are there in SSC CHSL?

Till you are eligible.